Read below to learn more about the town and the FCG&H Society:

A Sesquicentennial history book was published in 1987 containing a detailed accounting of the first settlements along Salt Creek which became known as Hurley’s Grove. As more pioneers settled in the area, the community reached out toward the northwest, and was first named Mt. Pleasant. Eventually, it was discovered, however, that there was already a Mt. Pleasant in Illinois and after much discussion and debate, the citizens settled on the name Farmer City. In 1869, Jacob Swigart, a member of the State Legislature, went to Springfield and introduced a bill into the Assembly to officially change the town’s name to Farmer City. 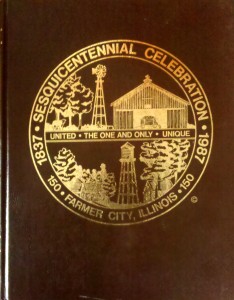 Most local residents participated on various committees to provide the community with a birthday celebration to remember. A history book was published containing a detailed accounting of the founding of the community known first as Santa Anna and Mt. Pleasant before the citizens finally settled on Farmer City.

This one-of-a-kind reference book contained 429 family histories, histories of 24 clubs and organizations, histories of 27 schools, 13 churches and 5 cemeteries, many priceless photographs and other memories recounted by those who called Farmer City home.   Many, many former residents returned to visit during the celebration and to share in the hometown spirit, renew old acquaintances and create new memories to last a lifetime.

Following the July, 1987 Sesquicentennial Celebration, there was much interest expressed in continuing the preservation of the history of Farmer City and the surrounding areas, and learning the stories of the families who at one time or another lived in  Farmer City.

As a result of this interest, the Farmer City Genealogical and Historical Society (FCG&HS) was organized in 1988. The purpose of the Society was to:

Interest in the Society grew rapidly as both current and past residents recognized the importance of preserving the heritage of this unique place called Farmer City-The One and Only. Early meetings were held at the Santa Anna Township Building, as members enjoyed genealogy classes and other programs of interest. The Society became very active in the community, participating in Christmas parades, house walks and tours of local homes and businesses.  Funeral home records and newspapers were indexed, identification and preservation of stones and burial places in local cemeteries were secured and recorded, as well as many other very worthwhile projects undertaken by the Society.

In the summer of 1990, charter member and local historian, Jim Tobin, introduced to the Society, the first edition of the MIRROR, a publication of pedigree charts, family records and stories, letters, newspaper clippings and other articles of interest. His goal, as editor of this new quarterly, was to create even more interest in local history and raise the membership of the society from 29 members to a lofty 200 members. However, through his dedication and tireless efforts to produce this one-of-a-kind quality publication, membership soon soared to over 325 members, making the Farmer City Genealogical and Historical Society one of the largest such societies in the area, and most certainly the largest for a community the size of Farmer City. In 1997, members watched with great pride as Jim received an Award of Excellence from the Association of Illinois Museums and Historical Societies. After nine years, Jim stepped aside and Pat Lamb took over the duties. Much of the success of the Society was owed to Jim Tobin, and later to Pat Lamb for their efforts on producing such an excellent publication every 3 months. In a letter written by Cdr. Richard E. Curtis, U.S.N. (Ret.) he shared his thoughts with the members of the Society. “I left Farmer City immediately after graduating from MTHS (Class of 1936) for the U.S. Army (later switched to the Navy-USNA Class of 1942). However, Farmer City has never left me. I read and enjoy every issue of the MIRROR cover to cover.”

The MIRROR ceased publication for several years, but renewed publication in January, 2011 when Malinda Snow accepted the invitation of the Farmer City Genealogical and Historical Society Executive Board to be the editor of the next MIRROR.  Susan Ryan took over the editor duties in May of 2012.

Dues may be sent to FCG&H Society, 224 South Main Street, Farmer City, IL 61842 or are payable via PayPal on the left sidebar. For a $15 annual membership you will receive four quarterly Mirror publications. 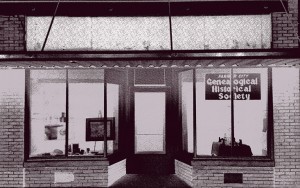 Another dream of the members would come to pass in the fall of 1993. When FCG&HS was organized, charter members had a long-range plan of someday having a museum. Many options were explored and thanks to the dedication and determination of Levi Murphey, a member of the Masonic Lodge A.F. & A.M. 710, this goal was attained. The Lodge graciously rented a portion of its building at 224 South Main Street to the Society to be used as a museum. Generous donations of time, money, antique farm and home treasures, display articles, photos, memorabilia, and the other local artifacts that make up our museum today were gladly given and received. Open house was held at the museum over Christmas 1994 with Mrs. Virgie Holt, age 93, a long-time piano teacher in Farmer City, entertaining visitors at the museum’s newly-acquired piano.

The genealogical and historical archives were housed in the back room of the museum, with charter member Jean Flannery sorting, itemizing, and organizing all paper information and photographs that came into the museum. Jean, a professional photographer, gave much time and talent to the task at hand, and quickly became the “go to” person for any necessary information  about the entire museum. Her dedication to the society became invaluable.

Current Museum hours are the second and fourth Saturday of the month from 10-2 pm. We are often in the museum doing research or organizing artifacts and archives. If the lights are on, the door is open – Come on in! Or contact us via email or call 309-928-7198 and we can easily set up an appointment for you to visit the museum or do family research.

The fall of 2000 saw another major accomplishment by this organization when it published Their Roles Remembered-Farmer City Veterans of World War ll, a 450 page volume which John Dawson, John Overton and Gene Houser, veterans themselves, gathered and compiled.  They used the stories written by the veterans and their own interviews of veterans, as well as stories of the impact of World War II on the Farmer City community.

Cooperation from the local American Legion and Veterans of Foreign Wars posts was a great help in the completion of this book, as were the scrapbooks and archives of the museum. This collection of World War ll stories by and about Farmer City veterans was written by John Overton, John Dawson and Gene Houser. Approximately 500 veterans were represented in this volume. The FCG&H Society was honored to have been a part of the creation of this publication.

Order a 2012 History Book through PayPal

Donate to the FCG&H Society